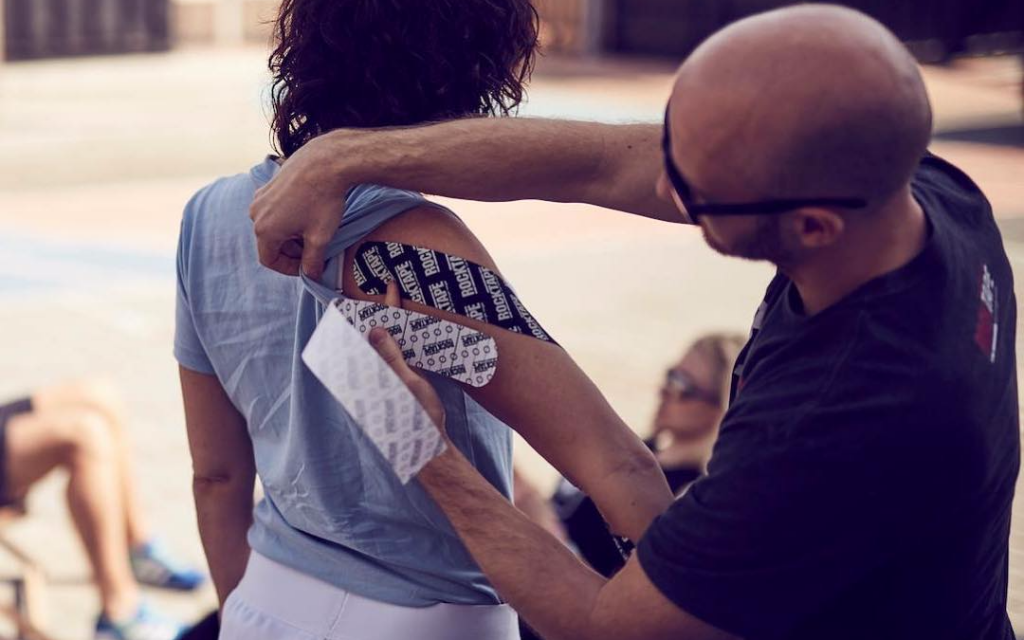 When people see kinesiology taping in action, the first question is usually, “Does it work?” followed quickly by, “How does it work?” Unfortunately, there are many misconceptions about what this kind of tape does, and how, so this article will get you on the same page with what science is telling us!

All of the effects of kinesiology tape came from the mechanical and neurosensory actions of the tape. When kinesiology tape is placed on the skin, some pretty cool things start to happen. Because of the stretchiness of the tape, it mechanically lifts and, in some cases, compresses the skin it is applied to. When you consider a cross-section of human skin and the underlying tissues, you see that each layer of tissue is connected to one beneath it through slips of tissue often referred to as, “skin ligaments.” Because of this, if you create a lifting effect with tape on the skin, this effect transfers to deeper layers, effectively decompressing the tissues beneath where the tape is applied.

This mechanical lifting effect is best observed when kinesiology tape is used over swollen and bruised areas. Time after time we have seen dramatic changes in inflammation and bruising when kinesiology tape is “fanned” over the affected area. Often in 1-2 days a bruise is almost completely cleared, and we have seen exciting effects on limb edema following lymphectomies and other procedures that can result in chronic edema and swelling. It is likely that by decompressing the skin and the layers of tissue beneath it, lymphatic ducts and blood vessels can clear fluid more efficiently, resulting in these often- dramatic changes. 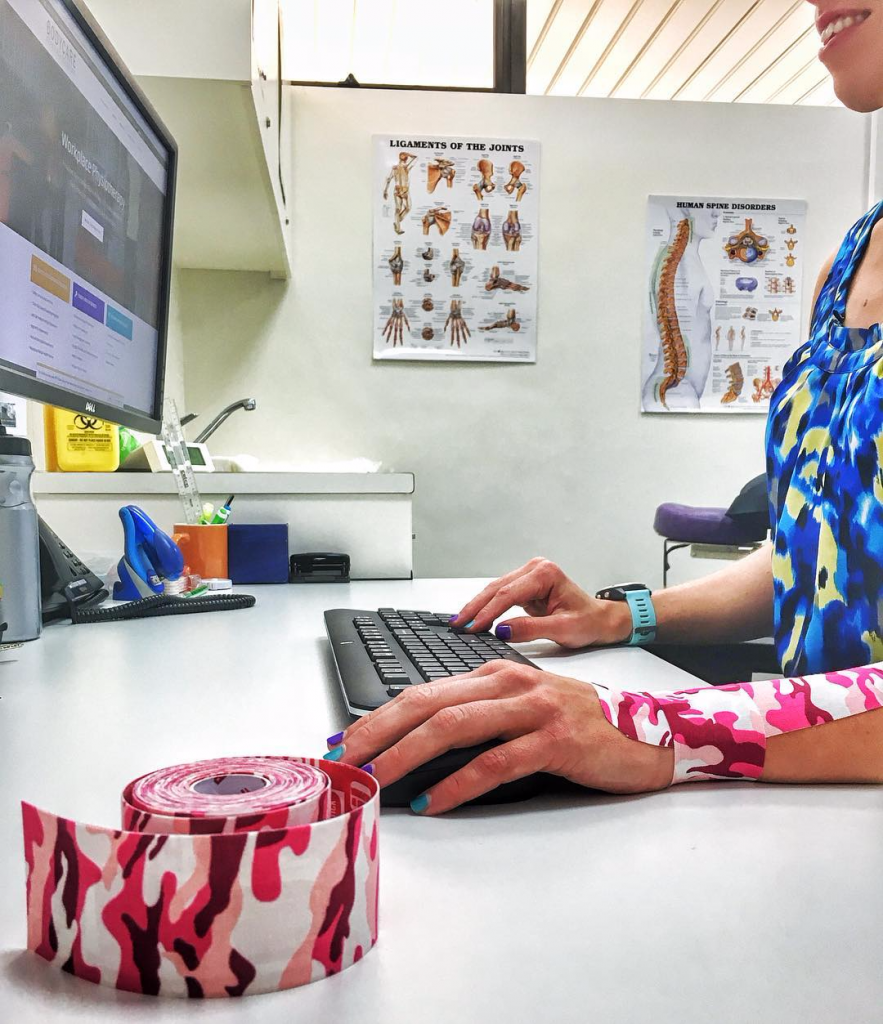 While this lifting effect is most easily observed over bruising, this same effect can help reduce discomfort*. By decompressing tissue there may be a discomfort*-modulating effect from reduced mechanical pressure on free nerve endings. Chronic musculoskeletal discomfort* is often associated with a decrease in the sliding and gliding capacity of fascial tissues. Creating decompression and shear in these layers via the stretch of kinesiology tape can help improve sliding and gliding and may be associated with a reduction in discomfort*, too.

To some extent, the brain makes decisions about movement based on force and the direction of that force in skin and connective tissue. This is particularly true in the fingers, where the detection of fine shearing forces are part of the reason humans have the dexterity we have. Creating specific directions of shear via elastic tape can change movement patterns in this same way. Clinicians see this on a daily basis when taping knees and shoulders, particularly. By using the stretch of tape and creating patterns of strain in the skin and underlying tissue, this changes the sensory input to the brain and results in altered output. Two of the primary outputs from the brain we are concerned with are movement and discomfort*, and so a favorable outcome of kinesiology taping can be discomfort* reduction and/or better movement simply because of adding to and altering the sensory input into the brain and promoting an improved output.

This is starting to sound a little complicated, so to bring the message back around, the effects of kinesiology tape in reducing swelling, decreasing discomfort* and changing movements comes from the mechanical effects of the tape and what happens in the brain as a result of these effects. Decompression and shear caused by the stretch in kinesiology tape and shear patterns created by placing it on the skin alters signaling to the brain. Because discomfort* and movement are both outputs from the brain, then changes in discomfort* reduction and movement are happening because we’ve altered the input being received from the area targeted by the tape. In this way, kinesiology tape doesn’t force the body to do anything it can’t do or “doesn’t want to do.” It simply encourages a normalization of function and aids the brain with more information. Pretty cool, huh?!

What Does ROCKTAPE (Kinesiology Tape) do?

1 – It turns down the volume on pain.

More specifically, it runs interference on pain. Similarly to how two equal and opposite radio frequencies cancel each other out to make no sound, Rocktape on the skin can interfere with painful signals which are directed to the brain. When the signals arriving to the brain are altered, it does not produce the sensation of pain. When kinesiology tape is properly applied, many of our customers call it “magic” or think that it fixed their injury instantly. In fact, it helps to change how your body interprets pain, turning down the pain “volume” that your body hears. Rocktape does so by affecting the nerve endings and different types of receptors in the skin of the injured area.

2 – It decompresses an area of swelling and inflammation.

When Rocktape is applied to the skin, it has a microscopic lifting effect underneath the skin and between the many layers. This allows for greater blood flow to and from and area, all while allowing the by-products created by inflammation to be removed more quickly.

It does so by allowing congested or compressed blood vessels (capillaries, lymph vessels, arteries, veins) to flow more freely. It also creates more room in between layers of fascia, muscle, fat, skin, and other structures.

Research has shown that kinesiology tape (Rocktape) on skin can attenuate muscle fatigue. In rehab, this is very important, not only for the parts of your body that are currently hurting, but also for the surrounding areas as they help to pick up the slack for areas that are currently not working very well.

When someone is injured, fatigued, sick, or inflamed, the symphony of muscle action that normally takes place with great accuracy often falls out of tune. This can happen all over the body. For instance, research has shown that people who sprain their ankle tend to have altered activity of their hip muscle as a result. What Rocktape can do is help to bring dormant muscle back to life and help calm down the overactive muscles. It helps your body coordinate movement as if it weren’t hurt, hence allowing it to heal properly.

5 – It spreads the physical stress.

Unlike conventional taping which is meant to prevent any movement at all, Rocktape is meant to allow full movement of the taped area. However, through the elastic properties and quick recoil, it can help to distribute forces to other nearby areas through the fascia, ligaments, and even bones.

I find it amusing, if not somewhat disconcerting that so many clinicians and athletes don’t take the time to learn more about kinesiology taping. The number of times I have heard people scoff, with little to no information on which to base said scoff, tells me it is time to start pointing some people in the right direction.

So, let’s break down some common misconceptions about Kinesiology taping right here and now. I am not going to go through all of these points and try to convince you of the exact effect. I will just point you in the right direction with lots of links and thinking points.

Misconception #1 – Kinesiology Tape only effects the skin, and hence has minimal effect.

Most people in the world of sports therapy will have learned much of the following information throughout their education:

Now, I am not guaranteeing that effecting the skin and superficial layers of fascia will result in exactly the effects you would expect. Honestly, I don’t know anyone who has really come up with an all-encompassing system of effecting the skin and fascia, although lots of clinicians are well on their way to a global system approach. Go find Luigi Stecco, Thomas Myers, or Diane Jacobs as some goo 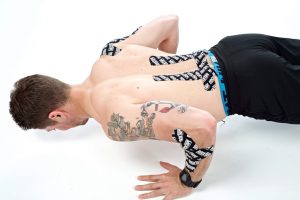 However, I think it’s pretty hard to say, theoretically and evidence-wise, that Kinesiology taping should do nothing. If you take the skin-brain connection, tactile feedback, and superficial fascial receptors into account, I’d find it hard to believe it does nothing. It probably just doesn’t do what most people think “tape” should do, which is a purely mechanical effect…

Misconception #2 – The effect is purely mechanical

Yes, this is an extension of Misconception #1…

In my humble opinion, any manual therapy clinician who thinks that all of what we do is “mechanical” in nature is behind the times. FAR behind the times. Sure, some of it is. However, I would beg to say that we are slowly coming to the understanding that even our “mechanical” approaches to pain and function are deeply rooted in neurological, physiological, and often psychological bases. I digress…

Prior to the advent of kinesiology taping, most people (clinicians and lay public) viewed taping as a purely mechanical endeavour. For all intents and purposes, taping was strapping. It was meant to prevent motion in a one or many planes.

Rather than try to explain every which way that kinesiology tape is NOT mechanical, let me guide you to the following links:

Misconception #3 – The effect is purely neurological 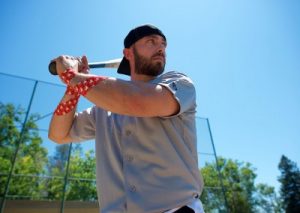 As you may have guessed by the last two misconceptions, a lot of the effect (as I teach it, anyway) is through cutaneous/neurological/fascial feedback loops. In my opinion, if that’s all you understood about Kinesiology taping, then you’re well on your way to being a dandy tapeologist.

However, one large effect of kinesiology tape that is often overlooked is the local decongestion effect. It has been theorized that this is one of the means by which it delivers stimulation to the many mechanoreceptors in the area. It is a simple lifting effect through tenting of the skin and hence altering (and theoretically decompressing) the cutaneous and subcutaneous mechanorceptors. Cool, eh?

But here’s another coolish (patent pending) tidbit: It has the same effect on blood and lymph vessels. I know all the latest craze is compression instead of ice (let’s not go there), but how about a little decompression? Hard to accomplish…unless you have tape. 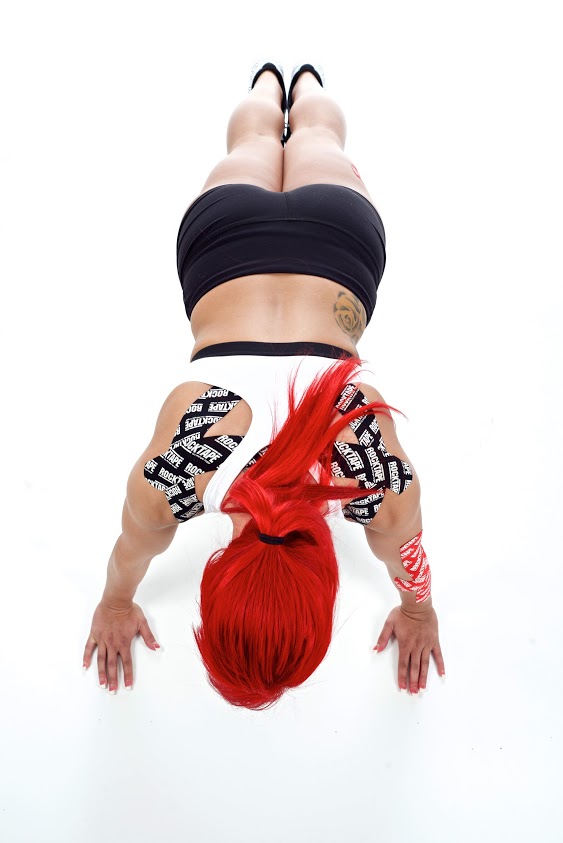 One of the issues with acute injury, and sometimes chronic injuries of just the wrong sort, is the inability of the body to manage its own fluid dynamics. I remember when I cracked my femur on a tree snowboarding in 2010. My left thigh was swollen to twice the size of the other one (not the picture here, mine was much, much grosser). No surprise. However, gravity being a prick and whatnot, the swelling took about 3 days to work it’s way down to my foot and ankle. I had never experienced this before; the excess of inflammatory byproducts sitting in my ankle made it nearly as sore as my femur. My toes were purple and my ankle dorsiflexion was restricted far beyond the contralateral side. These deleterious effects lasted for a few weeks beyond my return to activity, until I specifically addressed the issues.

The point being, edema is an issue in and of itself. So how do we move the swelling around? Ding ding ding! Tape it. I don’t have to lay out a plethora of  RCTs or research on this one (although it is starting to pile up). All you need, again, is the power of Google.

Dr. Avery and Dr. Kevin are specialized in using Kenesiotape, you can see some of this certications in Rocktape in the links Below: